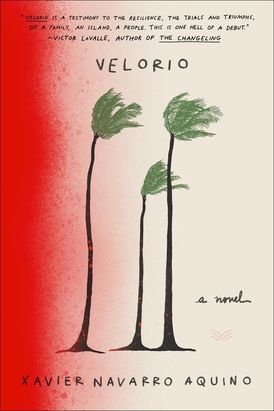 Set in the wake of Hurricane Maria, Xavier Navarro Aquino’s unforgettable debut novel follows a remarkable group of survivors searching for hope on an island torn apart by both natural disaster and human violence.

Camila is haunted by the death of her sister, Marisol, who was caught by a mudslide during the huracán. Unable to part with Marisol, Camila carries her through town, past the churchyard, and, eventually, to the supposed utopia of Memoria.

Urayoán, the idealistic, yet troubled cult leader of Memoria, has a vision for this new society, one that in his eyes is peaceful and democratic. The paradise he preaches lures in the young, including Bayfish, a boy on the cusp of manhood, and Morivivi, a woman whose outward toughness belies an inner tenderness for her friends. But as the different members of Memoria navigate Urayoán’s fiery rise, they will need to confront his violent authoritarian impulses in order to find a way to reclaim their home.

Velorio—meaning “wake”—is a story of strength, resilience, and hope; a tale of peril and possibility buoyed by the deeply held belief in a people’s ability to unite against those corrupted by power.

“VELORIO recognizes that neither utopia nor dystopia are finite states, that they exist alongside and even inside one another, like the hurricane and the eye, the empire and the island. Xavier Navarro Aquino takes us on a riveting, harrowing journey through the aftermath, where the natural violence of the storm is compounded by disaster capitalists; the dead haunt the living; impossible decisions are made and seemingly impossible futures are born.”
- Justin Torres, national bestselling author of We The Animals

“VELORIO is a novel reckoning with the tragic event of the great Puerto Rican hurricane and a vibrant examination of quiet lives in extremis. It is an assured, brilliant debut from a new, gifted writer.”  - Chigozie Obioma, award-winning author of An Orchestra of Minorities

“‘We all thought we were ready for Maria.’ With this line, Xavier Navarro Aquino sets the stakes for his beautiful and heartbreaking novel. Was Puerto Rico ready for Hurricane Maria? No. And yet the people endured it anyway. In the vein of Jesmyn Ward’s SALVAGE THE BONES, VELORIO is a testimony to the resilience, the trials and triumphs, of a family, an island, a people. This is one hell of a debut.”
- Victor LaValle, author of The Changeling

“This debut novel traces a group of survivors who fall under the spell of an authoritarian cult leader in the days following Hurricane Maria’s destruction in Puerto Rico. It is deeply imagined and deeply felt – imagistic and strange and haunting – and simmering with grief and rage.”
- Gabriela Garcia, New York Times bestselling author of Of Women and Salt

"Pulling readers into the story with an impending hurricane and a mother and her two daughters waiting in fear, first-time novelist Aquino sets a mood of charged and desperate hope. Inspired by Hurricane Maria's assault on Puerto Rico in 2017, Aquino presents a broader examination of loss, trauma, rebuilding, and even the notion of utopia....The rituals that Ura and his followers start in Memoria recall the ostracizing instinct of the stranded boys in Lord of the Flies, and raise questions about the warring instincts of humans in the face of disaster and societal breakdown. Aquino mixes Spanish into the English text and stacks up details and characters, trusting the readers to engage with the world he creates, which is richer for all that is implied and unexplained. This is a demanding read that rouses high emotions and offers no simplistic resolutions." - Booklist (starred review) 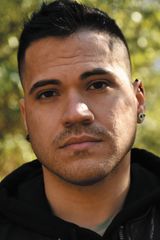 Xavier Navarro Aquino was born and raised in Puerto Rico. His fiction has appeared in Tin House, McSweeney’s Quarterly Concern, and Guernica. His poetry has appeared in the Caribbean Writer and is anthologized in Thicker Than Water: New Writing from the Caribbean. He has been awarded scholarships from the Bread Loaf Writers’ Conference, a Tennessee Williams scholarship from the Sewanee Writers’ Conference, and a MacDowell Fellowship. He holds an M.A. in English Caribbean Studies from the University of Puerto Rico, Río Piedras, and a Ph.D. in English from the University of Nebraska–Lincoln. He is currently an ACLS Emerging Voices Fellow at Dartmouth College.

Other Works by Xavier Navarro Aquino